How the Fortress Europe

denies asylum to the Syrian refugees

More than 2.3 million Syrian refugees were recorded in  December, of whom 52% are minors,  in addition to at least 4.25 million people evacuated from their country. Altogether, more than 6.5 million men, women and children had  to leave their homes in order to survive to the atrocities of  the war in Syria – almost one third of the whole population.

However, only 55.000 of these succeeded in entering the European Union and asking for asylum; but the member states said they were ready to accept only just 12.000 of them. “It affects the 0.5% of the  Syrians who left their country, showing how the EU miserably failed to do its share to provide a safe place for those have nothing left  but their own life”, said Salil Shetty, Amnesty International General Secretary, on the occasion of the presentation of the report entitled An international failure: the crisis of Syrian refugees. “The  number of the re-settlements offered is really deplorable, and the European leaders should bow their heads with shame”, added Shetty. “Their words sound banal compared with the need. Europe must open its borders, foster safe entries and to put  an end to these serious violations of human rights”. 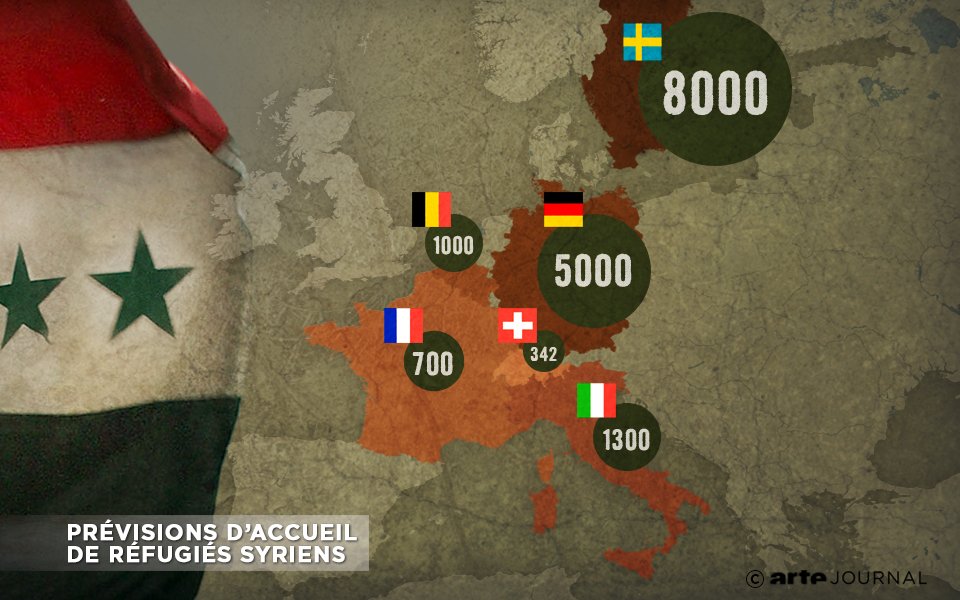 Amnesty International denounces that  just ten EU Member States offered a re-settlement or a humanitarian admission  to the refugees coming  from Syria. “Those who succeeded in getting through the barricades of  the European fortress have largely gone towards Germany and  Sweden, countries that offered the biggest aid to the asylum seekers”, can be  read in the report. From October 2011 up to October 2013, Sweden received 20.490 new claims for asylum, whereas Germany received 16.100. The remaining EU States pledged themselves to receive only 2.340 refugees. In Greece, Cyprus and Italy less than 1.000 people sought asylum in each of the three countries; France offered its availability for 500 people (0,02% of the total number who fled), whereas Spain limited itself to receive only thirty seekers, i.e. 0.001% of the total refugees.

Ninety-seven%  of the citizens who fled from Syria  have gone to the neighbouring countries: Turkey, Egypt, Iraq  and, most of all, Lebanon and Jordan – where today live 835,735 and 566,303 refugees, respectively. “This entailed a 20% increase  of the resident population  in Lebanon, and a 9%  for the Jordan one”, adds Amnesty International . “In those two countries, most of the Syrian refugees live under very  insecure conditions into overcrowded refugees camps, into collective immigration centres or into unofficial settlements”. In Jordan, nearly one-third of the refugees was given shelter in six camps, of which the most crowded is Zaatari – the world second largest camp  with 117,000 living in. The remaindering Syrian refugees live in villages and small towns nearby the Syria northern border, and in the capital, Amman. “On the other hand, there are no official refugees camps in Lebanon, but only those that have been giving shelter to Palestinian refugees for a long  time”, reports Amnesty International. “So, Syrians are forced to live at the city margins, into unofficial camps they built up by themselves”.

The number of recorded refugees in Turkey is of 536,765 people; but, according to the local government, this figure has already exceeded the amount of 700,000. Two hundred thousand Syrians are “given shelter”  in refugee camps managed by the State. The  international human rights organization nevertheless denounces that, since March 2013, more than  600 Syrian refugees  have  been forced out of Turkey and  deported to Syria. “Since then – explains Salil Shetty – we have  received many reports of further  forced repatriations of many people that Turkish authorities charged with criminal conduct or with alleged infringements of the law”.

According to the UNHCR (United Nations High Commission for Refugees), up to November 30, 2013, in Libya 15.898 Syrian refugees were  recorded, even though the number of Syrians living in population is estimated to be no fewer than 200,000. The refugees’ right to enter Libya has been constantly reduced starting from September 2012, after the terrorist attack on the U.S. consulate in Benghazi. Further restrictions were ordered in January 2013, with an entry visa required for all Syrians. “This obliged hundred of refugees to enter the country using unofficial routes, exposing themselves to danger and to mistreatment by traffickers and the various existing armed militias”, charged  Amnesty. “Libya does not have an national asylum system; most of the refugees living in the country have an irregular migrant status, in spite of the decision of the Ministry of Internal Affairs to grant a residence permit to those who register at the Passport Office”. As Amnesty International pointed out during a visit in Libya in November 2013, local authorities and armed militias — which increased in number after the end of war in 2011 — often would not acknowledge the residence permits. “In some cases, the Syrian refugees have been arbitrarily jailed in detention centres for immigrants  on  a charge of living illegally in Libya”, adds Amnesty. “Those interviewed claimed they had  been victims of attacks  by armed men, robberies, verbal persecutions and, in some cases, kidnappings.  Others said they had been subject to serious forms of mistreatment, hard labour with very low wages and, sometimes, they even did  not receive any form of payment.”

Compared with the 12,000 Syrians whom EU acknowledged the right to re-settlement, other tens of thousands are obliged to risk a dangerous voyage by land or sea in order to reach a Europe appearing more and more barricaded and militarized. From January 1 to October 31, 2013, 10,680 Syrian refugees reached the Italian coastlines after having left  the ports in Egypt, Libya, Turkey and Syria. Others reached Greece by sea through the Aegean Sea or from the land border with Turkey. “We have witnessed hundred of Syrians losing their lives in the Mediterranean Sea”, was the harsh comment of Salil Shetty. “And it is regrettable that those who are risking their safety and life to get here are violently rejected by the police or border patrol or they are held in custody under really miserable conditions, with insufficient food, water and medical care”.

The trip towards Italy is surely  the one that caused the most tragic  events. During the former ten months of 2013 the number of refugees and immigrants coming from North Africa who drowned at sea was estimated at  650 people. In its report on the international incompetence to provide proper reactions to the Syrian humanitarian crisis, Amnesty International dedicates a section to the tragic wreck of a boat with more than 500 people on board, which occurred off Lampedusa on October 11, 2013. “Many of them were Syrian refugees”, writes the NGO. “According to the survivors’ story, while leaving the Libyan waters, the boat was damaged by a Libyan military unit that opened fire against them. The wrecked boat quickly became waterlogged and later sunk, carrying along hundreds of men, women and children. The survivors stated that they had remained in  the water for hours before units from Malta and Italy helped them”.

There were countless abuses and violations committed by the EU frontier’s authorities. “The EU control policies are more and more prejudicial to the rights of refugees, asylum seekers and immigrants”, charged Amnesty. “The boundaries‘ control efforts introduced over the past years – including outsourcing  anti-immigrant tasks and building wire-net fences, amounted to severe attacks on the rights of those asking to enter the European Union. The EU  certainly has the right to control its boundaries, but the way in which it is done cannot entail a human rights violation – as is  happening now”.

In particular, Amnesty reveals how the EU massively financed the programmes strengthening control of Greece’s external borders. In the last two years, the European Commission – in the scope of  the so-called Return and External Borders Fund – allocated Eur 228 million to Greece in order to install surveillance electronic systems and to extend its custody capacity for people who illegally entered the country. At the same time, Greece was given only Eur 12.220 million by the European Fund for Refugees that supports immigration activities. Thanks to the subsidies, Greek authorities carried out the construction of 10.5 kms of anti-immigrant wire-net fences along the 203 kms of borders with Turkey, furthermore enabling 2.000 new vigilantes starting from summertime 2012. “These efforts, often obliged the refugees to take even more dangerous routes in the Aegean Sea,”, adds Amnesty International. “During their last-ditch attempts to get European protection, many refugees, including families with newborn babies and small children, pay their last savings to the traffickers in order to sail on board of small and overcrowded boats, unsuitable for sailing”. Like the Sicily Strait, the sea between Greece and Turkey is the scenery for countless tragic events. From August 2012 until now, at least 130 refugees, most of them coming from Syria and Afghanistan, died while trying to land in Greece in the eleven shipwrecks verified up to now.

Finally, Amnesty International revealed how many refugees who arrived in Greece and Bulgaria were subject to degrading and inhuman treatments. “Some Syrian refugees said they had been subject to abuses by Greek police officers or coastguard officials who, holding weapons and shielded by helmets, robbed them of all their goods and, at the end, sent them back to Turkey”. The number of illegal expulsion operations from Greece is not known, but the NGO believes  it involved hundreds of people.  In the early months  of  2013, no fewer than 5.000 refugees arrived in Bulgaria. Most of them are sheltered in emergency centres, the main one of  which was placed in the town of Harmanli. “It is, effectively, a detention centre,” said Amnesty. “Our staff found refugees jailed there – in some cases for over one month –under squalid conditions in containers, dilapidated buildings and tents. There was a lack of sufficient sanitary facilities, and food, medicines and beds were in short supply. A large number of prisoners, among them also people wounded in the war, needed medical care; some others contracted chronic diseases or suffered mental disorders”.